72-Hour Challenges, also called Card Flipping Events, are events that typically last for, as the name suggests, 72 hours. While shorter versions have occurred, the mechanics are the same.

by completing various tasks. Unlike other events, there is no cap on the amount players can receive with each task. With the latest occurrences of the Challenge,

are earned from a special roulette when players win a Multiplayer battle. All possible results are the same. The amount of

to immediately claim the monster. The

cost reduces with each card flipped.

Despite the appearance that the cards are shuffled, the results of each flip are completely random, meaning whichever card a player selects is irrelevant to the result. It is important to note that the chances of each reward are not necessarily equal. While it is possible to obtain the monster on the first flip, it is less likely than other rewards.

Most 72-Hour Challenges have 3 monsters that players may attempt to get, listed in order from least to most expensive. Often, higher-level players are offered ranked up versions of the monster. After flipping all the cards and collecting all the rewards for each monster, players may (depending on the Challenge) be able to play again. 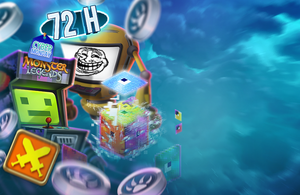 In the Play at Home Edition of the 72-H Challenge, you can find Stöirm, Tephra, and Tesaday! Get your Challenge Coins to flip the cards ONLY at battle victory roulettes in the Multiplayer Mode! These roulettes will always award the same amount of Challenge Coins and the amount will be progressively higher depending on the League. During this event, you will earn double the Trophies for every successful battle (both attack and defense), but if you're defeated, you will lose double the Trophies than usual! Please note this 72-H Challenge can only be completed once.

Retrieved from "https://monsterlegends.fandom.com/wiki/72-Hour_Challenge?oldid=73386"
Community content is available under CC-BY-SA unless otherwise noted.