Join the Bounty Hunt with other players and flip tiles to find the Fugitive. While you're on it, you'll find juicy rewards! Once you've found this elusive monster, you and the rest of the players will have limited time to join forces and defeat it! In this event, you'll be able to collect Cells of a new monsters. Tentacon is a Thunder Controller with Time Stop and Thunder Weakness skills. However, the Fugitive keeping those Cells won't be easy to bring down. Need help from a Bounty Hunter? Duke Shrimpwader is available in an exclusive offer: He's a Water and Light Attacker who can remove positive effects and can also deal Triple Damage against this Season's Fugitive!

Players are placed onto a map with other random players who flip tiles. Flipped tiles will reveal rewards, the Fugitive monster, or nothing. If the tile is empty, it may display an arrow pointing toward a tile containing a reward or the Fugitive (explained below). Higher leagues have larger maps with more tiles.

Flipping tiles and attacking the Fugitive costs stamina. Players regenerate 1 stamina point every 30 minutes and have a cap of 5 stamina, but it will refill at the start of a new map. If a player has more than 5 stamina when the round ends, they will keep that stamina for the next round. Players can refill their stamina at a rate of 5 gems per stamina point, or purchase larger stamina packs with gems in the Era Shop (when a Bounty Hunt event is active). It costs 1 stamina per tile flip or boss attack, regardless of league.

The direction of the arrow does NOT point directly toward the reward, it only informs players that the reward is simply to the top, left, bottom, or right of that tile's location. The gallery below visualizes how the arrows function with the star representing the location of the reward:

Once the reward has been found by a player, the arrows will disappear and new arrows will point to a new reward.

Flipping tiles can uncover Lucky Shots. A Lucky Shot will contain a reward granted to the player who flipped the tile but will not erase or generate new arrows. Any tile can contain a Lucky Shot and arrows do not point towards them. They contain the same reward bags and provide the same rewards as reward tiles.

Rewards can be gold, food, monster cells, gems, bounty hunt stamina or special items known as Bounty Coins. These can be used in the Era Shop (when a Bounty Hunt event is active) to acquire different monster cells. Reward bags are classified as low, medium, or high rewards and their contents are dependent on the League.

The Fugitive will not enter the map until enough have been flipped. After the Fugitive enters the map, he could hide under any tile! Once a player finds the Fugitive, all players can attack to earn points.

The Fugitive will stay only for a limited period. It must be found and defeated within this time period. If the fugitive is defeated, players will be granted completion rewards according to their participation in the current Map. Otherwise, there won’t be completion rewards.

Fugitive battles are automatic and last 3 rounds (displayed below the turns indicator). The Fugitive will attack at the end of each round and the battle will finish either if the Fugitive is defeated, the player's team is defeated, or the rounds are all completed.

Players will receive a popup with their battle results after the battle. If they manage to be the player defeating the Fugitive, they will get a bonus reward.

All Fugitive monsters' skills have no stamina costs and no cooldowns (meaning stamina drain and cooldowns activated skills are ineffective). Additionally, they are immune to sudden death, immune to death countdown, immune to life removal by percentage, immune to possession, take very reduced damage from tortures and have anticipation and trait protection. They also can't be healed (meaning reverse healing is also ineffective). Each Fugitive monster also has its own stats and traits.

There are rewards given for flipping the tile that contains the fugitive, as well as attacking the fugitive and defeating the fugitive. These are gems and bounty coins, with higher amounts given in higher leagues. Milestone rewards are given to the person that causes damage beyond a certain milestone, those being 20%, 40%, 60% and 80% of the fugitive's life.

Players appear in the leaderboard within their group in order of Bounty Points achieved. The higher a player appears, the more rewards they will get if the Fugitive is defeated. Points are reset after each hunt.

With the new Bounty Hunt update, all the players can move up a league without being in a top place in the leaderboard.

Leaderboard rewards are given based on a player's position on the leaderboard. These rewards require at least 15 Bounty Points to be earned. 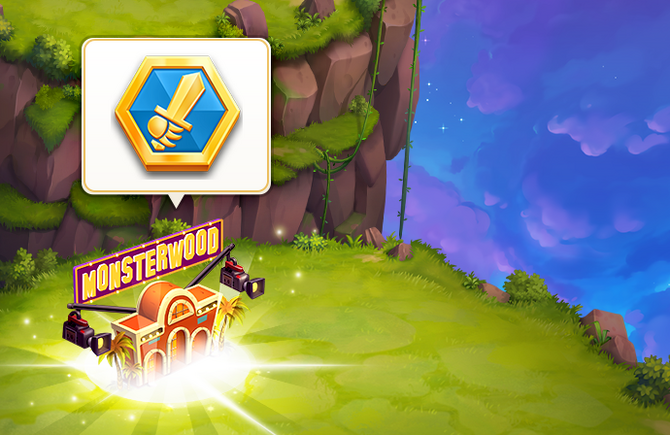