Each monsters in Monster Legends has a certain element or combination of elements, which unsurprisingly determine various aspects of gameplay.blkju

In Monster Legends, monsters are restricted from leveling above Level 10 without the aid of a temple . These temples must also correspond to the element of the particular monster that the player wishes to enhance. For example, a thunder monster requires a Thunder Temple before it can advance above level 10. Hybrid monsters require temples of both elements before they can level up. 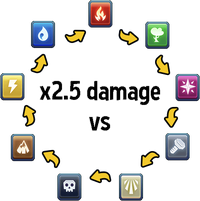 Dual element monsters typically have the combined weaknesses and resistances of both elements. But if (such as fire/nature) a monster would be weak to an element(in this case fire) AND resistant, the resistance overrides the weakness. Thus a fire/nature monster has only one weakness.