Team Battlegrounds is an intermittent team-based event in which two teams compete for great rewards. It has been removed from the game.

In order to be eligible, you need to belong to a team that is, at least, in Gold 3 League and with 10 or more players at level 40 or above (including yourself).  Make sure that both you and your team are eligible before the matchmaking process begins!

In the matchmaking, teams are divided into different difficulty tiers, based on their League. Different tiers have different restrictions and different rewards.

As teams gain more and more points, they will access better rewards. Each reward milestone has a minimum score that teams must reach in order to unlock it. Your team will receive the rewards of the milestone it is in when the event ends.

Players can also get Individual Rewards based on their performance and contribution.  Placing defenses, destroying enemy slots and defending against enemy attacks give individual points.  Each player must reach the minimum individual qualification score in order to access both Team and Individual Rewards.

During the Defense Phase, points can be received by setting your own defenses.

The Defense Phase lasts for 24 hours.

To access the Attack Phase, your team needs to reach, at least, the lowest score milestone during the Defense Phase.  Teams that fail to reach that minimum score will be disqualified and won't be able to keep playing.

Monsters placed on defense slots cannot be used to attack enemies in the Attack Phase.  Make sure you select your best monsters for defense and attack, based on their stats and skills.

Certain territories have restrictions, including: rarity, element, book, and/or rank.

Players may make a maximum of 10 attacks. The order of attack goes from the center to the edge. As soon as you destroy one territory, you will be able to attack every adjacent territory. The Attack Phase lasts for 24 hours. All defending teams behave similarly to Survival Dungeons - if a team successfully defends, in the next defense battle the monsters will have the same HP and SP as they finished the last fight.

After you use a monster to attack an enemy slot, it will immediately become exhausted and won't be available again in the Attack Phase. Select your defending and attacking monsters carefully! 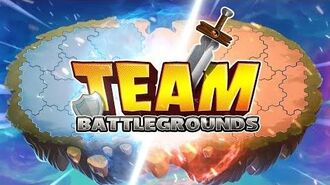 Retrieved from "https://monsterlegends.fandom.com/wiki/Team_Battlegrounds?oldid=89528"
Community content is available under CC-BY-SA unless otherwise noted.