Thunder Eagle is a bird-like monster with a yellow and blue body. It's wings and tail are jagged, and mostly yellow, though they also sport blue feathers in the final stage. Various lightning bolt shaped feathers make up it's tail and forehead. As a baby, It is small, rather like a woodpecker. It has blue shapes around it's eyes. 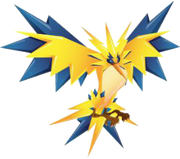 Retrieved from "https://monsterlegends.fandom.com/wiki/Thunder_Eagle?oldid=25461"
Community content is available under CC-BY-SA unless otherwise noted.